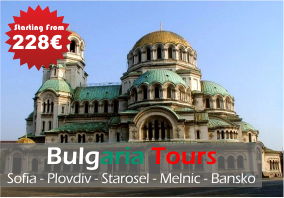 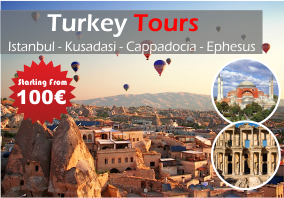 Breakfast, Lunch and Dinner Included
Arrival at Sofia airport and transfer to the hotel. Today you will be free to explore Sofia on your own. Overnight in Sofia.

Breakfast, Lunch and Dinner Included
One day tour to the town of Koprivshtitsa. A town with a special spirit, now turned into a museum where you can feel the unique atmosphere of the Revival Period in Bulgaria. Outstanding ethnographic treasures can be seen together with significant historical monuments: specific architecture, original furniture, old weapons, national costumes, traditional crafts, precious jewellery. In the afternoon drive back to Sofia. Overnight in Sofia.

Breakfast, Lunch and Dinner Included
Departure for Bansko. On the way stop for a visit of the beautiful Rila Monastery - the most exquisite example of the monastery art and architecture in Bulgaria. Guided tour of the monastery complex. Visit to Nativity of the Virgin Church with its miracle icon of the Virgin and splendid gilded iconostasis, the old kitchen, the monastery museum where you can learn about the long and heroic history of the monastery, the woodcarved cross made for a period of twelve years by a monk called Rafael, Hrelyoâ€™s Tower and many spectacular views from the mountain and the surrounding nature. Arrival in Bansko in the late afternoon. Bansko is the most famous ski resort in Bulgaria with excellent conditions for winter sports. The town also keeps a special authentic atmosphere with its old houses and traditional restaurants. Accommodation and overnight in Bansko.

Breakfast, Lunch and Dinner Included
Transfer from Bansko to Thessaloniki, our professional driver who will transfer you to your hotel. It is your free day to explore and enjoy Thessaloniki on your own. Depending on the time of arrival, you can spend the day walking around, doing the shopping or relaxing in one of many cafeterias or Taverns in Thessaloniki down town. Overnight in Thessaloniki.

Breakfast, Lunch and Dinner Included
Breakfast at the hotel. After breakfast, drive to Vergina, the most important remains of the monumental palace of the Kingdom of Macedonia, lavishly decorated with mosaics and painted stuccoes, and the burial ground with more than 300 tumuli, some of which date from the 11th century B.C. One of the royal tombs is identified as that of Philip II, who conquered all the Greek cities, paving the way for his son Alexander and the expansion of the Hellenistic world. Lunch will be offered at a local restaurant in Vergina. After lunch drive back to Athens. On the way, make a short stop at Thermopylae where a fierce battle took place between the Persians and Greeks during the Persian invasion of 480-479 BC. The Greek force (300 strong) was very small but was determined to make a stand against the huge Persian army. Arrive in Athens early in the evening for dinner and overnight at the hotel.

Breakfast, Lunch and Dinner Included
After breakfast, we will start the tour of the city of Athens, visiting Syntagma Square - the centre of modern Athens and view the changing of the guard in front of the Parliament building. On the way to Acropolis, we will have a stop to the Panathenaic Stadium-made of white marble- where the first modern Olympic Games were held in 1896. The impressive, work of Art, Stadium was the finish line of the Marathon Race of Athens 2004 Olympics. We will also see the Temple of Olympian Zeus - the largest Temple ever built in Greece. We will view the National Gardens, the Academy, the National Library, the University, and finally we will visit the most magnificent monument in the world - the Parthenon on the Acropolis. Then drive to Piraeus, Greece''s main port and continue by the costal road to Kastella, a picturesque hill area overlooking the Mikrolimano yacht harbour, having the opportunity to see numerous restaurants and cafes by the sea. On the way to Mesoghia and the Winery, enjoy the journey through the southern suburbs of the city, along the coastal avenue of Athens riviera with its magnificent view to the sea. Arrive at the Winery* and enjoy the visit. Drive to Porto Rafti Area by the sea for a lunch. After the lunch, drive to McArthur Designer Outlet shopping village. In continue, we drive at a Pottery workshop to see the craft of making vases and the exhibition of different products. Afterwards, drive back to hotel, passing by the facilities of the Olympic Athletic Centre of Athens, where the majority of the athletic events were held during the 2004 Olympic Games. Dinner and overnight at the hotel.

Breakfast, Lunch and Dinner Included
Breakfast at the hotel. After breakfast transfer to Piraeus Port (or Rafina) for a boat to Mykonos. Arrival in Mykonos Port and transfer to the hotel. Then spend the whole day at leisure. Enjoy your day on this Cycladic island known for its great night life and the townâ€™s Cycladic architecture. Mykonos beaches a must to experience, such as Platy Gialos, Psarou, Ornos, Paranga â€œParadiseâ€, â€œSuper Paradiseâ€, Elia, Kalafati, Kalo Livadi. On Mykonos western shore are Agios Stefanos, Houlakia, Tourlos, Megali-Ammos. Walk through the narrow alleyways in Mykonos town and visit beautiful churches and the famous windmills. Overnight in Mykonons.

Breakfast, Lunch and Dinner Included
Breakfast at the hotel. Day free to explore the island on your own. Mykonos Island is the most famous and cosmopolitan tourist island in the Eastern Mediterranean amongst the Cyclades, something which is not just by chance. Expect to experience the exquisite visuals of white-washed houses, proud windmills, a multitude of chapels, busy back streets with balconies full of flowers and a multicoloured fleet of fishing boats at the port. If youâ€™re after a bit of history and culture, the island has five museums you can visit as well as a beautiful church. The church of Panagia Paraportiani is located beyond the Delos Ferry Quay on the way to Little Venice. Overnight in Mykonos.

Breakfast, Lunch and Dinner Included
Breakfast at the hotel and transfer to Mykonos port for a boat to Piraeus. When you arrive at Piraeus port you will be transferred to Athens International airport for a flight back home.

One of the best combined tour programs in the world. In a weeks time, you will be able to see one of the most beautiful cities of Europe; Sofia, one of the best places to feel the cultural heritages of Europe; Athens. Enjoy Istanbul, where Europe meets with Asia, having a history of thousands of years. Enjoy the history, parties and gaming in Bulgaria. Become impressed by Athens, the city of all civilizations and philosophy. Your journey will end on the great beaches of Mykonos.

International flights; Insurance: All types; Visas Meals lunch and dinner; Items of a personal nature such as alcoholic drinks, cold drinks, laundry; Any others expenses which are not mentioned at the included section; Evening panoramic tour Sofia by night and dinner at a traditional restaurant with folklore music and dances.